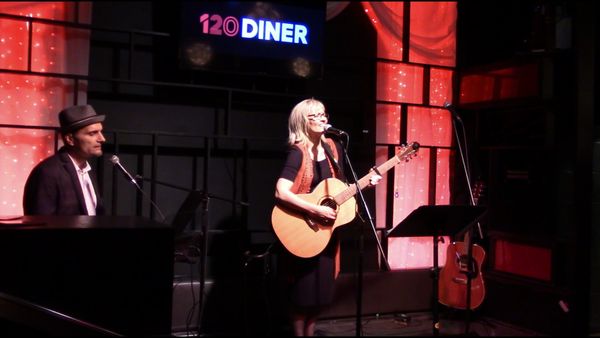 We had a wonderful time last night presenting the songs of Leonard Cohen, Bob Dylan, and Phil Ochs to a great audience at the 120 Diner.

We kicked off the evening with one of our originals, 'One Song' (listen here), that talks about how a song itself can't change the world but people singing it can. Whether that's by the message in the song or by the feeling that the song evokes. Seemed appropriate on this kind of tribute night.

Following that, we round-robined the songs by artist alphabetically. First up was Cohen's 'So Long Marianne' and coincidentally, it turns out there were two Marianne's in the audience. Dwight moved between the guitar and piano throughout the evening. I loved singing 'Famous Blue Raincoat' to a gentle piano accompaniment, and Dwight's fearless rendition of 'Like A Rolling Stone' with Dylan phrasing and a driving guitar seemed to be a crowd favourite.

Of course there were many more great songs, by all three artists to choose from, than we had time for in the show. When making our set list we were divided on whether to include 'Mr. Tambourine Man' or 'Blowin In The Wind' so we took an audience vote. It was pretty close but in the end, 'Blowin In The Wind' emerged victorious.

We snuck in one more of our original songs at the start of the second set...a stripped down version of 'World Made By Hand'. An audience member remarked after the show that she was glad to hear a few of our originals included in the evening and bought the CD with that song on it.

As one of his most widely covered songs, there are so many great versions of Lenard Cohen's 'Suzanne' out there. In selecting which one to perform, we'd narrowed it down to three that we liked best...Cohen's sparse and moody version, Judy Collin's trademark flowing version, and Nina Simone's animated eclectic version. Rather than choosing one, we went with all three...a verse and chorus of each!

In researching the songs we'd come across some great little tidbits that we shared with the audience in brief introductions. I especially like the ones that are quotes from the songwriters themselves as they usually provide some pretty interesting insights.

Although I've heard some critics argue that Cohen's 'Hallelujah' should be retired, I don't agree. It's a beautiful song that people like to hear and sing along to. We ended the evening with it and it was lovely hearing the audience voices join us on the chorus.

After the show, one audience member told me she'd never heard of Phil Ochs before and couldn't wait to look him up and hear more of his music. He is definitely a songwriter who should be even better known than he is.

It was a really fun evening and I think we will look at doing another one of these tribute shows again in the future.

SET ONE: ONE SONG / SO LONG MARIANNE / MY BACK PAGES / THERE BUT FOR FORTUNE / BIRD ON THE WIRE / MIGHTY QUINN / WHEN I'M GONE / FAMOUS BLUE RAINCOAT / BLOWIN' IN THE WIND / DRAFT DODGER RAG / LIKE A ROLLING STONE

SET TWO: WORLD MADE BY HAND / SUZANNE / I AIN'T MARCHING / GIRL FROM THE NORTH COUNTRY / FIRST WE TAKE MANHATTAN / HEAT OF THE SUMMER / CHANGES / I SHALL BE RELEASED / HALLELUJAH