Where Did The Summer Go?

Where did the Summer go? That may seem like an odd question now that we’re well into Autumn, but it’s been awhile (too long according to blogging experts) since our last post so we’ve got some ground to make up.

One of our favorite places to play in the Summer is at Barbara Hall Park as part of the Church Wellesley BIA’s Music In The Park summer music series. Music, Summer, performing outdoors...it doesn’t get any better. We’ve made many musical friends in The Village, in the years we've been part of the series. Many of our own fans also join us for a relaxing interlude in their day, in the oasis under the trees with the bustle of Church St. just behind. Our three shows mostly featured our original music in addition to requested favorites like 'Blowin’ In The Wind' and 'One Tin Soldier'.  Our only regret was not being able to perform at the ‘No Hate In The Village’ event as we had a prior booking. (Photo: P. Chan) 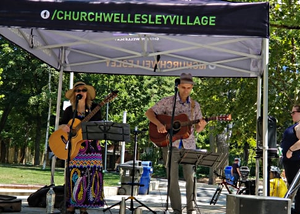 There’s nothing like a road trip to the country to remind you of how beautiful Summers are in Ontario. At the end of July, we drove up to Buckhorn to perform at their Community Care’s annual fundraiser, for a second year. The minute you leave the 401 and enter  Kawartha lake country, everything slows down and gets greener and hillier! This year’s show was a tribute to the music of Bob Dylan and Leonard Cohen, two of our favourite songwriters. Shelley Coppersmith joined us on violin and mandolin and I brought up my ‘vintage’ M1 to add keys on several tunes. There were many magical pin-drop moments during the evening as the crowd listened intently. Sue’s 'My Back Pages' and 'Famous Blue Raincoat' and my recent song crushes 'Just Like a Woman' and 'Amen' come to mind as highlights. And of course, Shelley's many showstopper solos. We ended the night appropriately with Cohen's 'Closing Time', which has way more lyrics than I ever thought!  (Photo: Jodie) 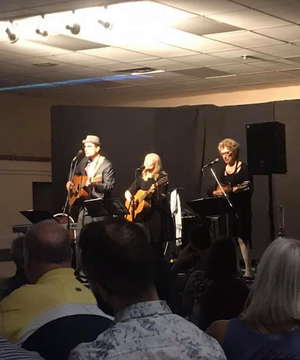 In September, we helped Miles Nadal JCC launch the 2019/2020 season of their Adult Daytime Culture and Education program with our new 'Legendary Ladies of Folk' show. Featuring the work of Joan Baez, Joni Mitchell, and Buffy Sainte-Marie, the show sold out three weeks in advance! When we'd agreed to the theme of the show, we only knew about six of their songs and needed an additional twenty, so the pressure was on. It was the good kind though, that makes one stronger and builds calluses :) The biggest challenge was deciding which songs to pick given the vast catalogues of the three. We stuck mostly to 'the hits' and response from the audience was very positive. The liveliest responses went to 'Circle Game', 'Indian Cowboy In The Rodeo', and 'The Night They Drove Old Dixie Down' with its Na Na Na along. (Photo: P. Chan) 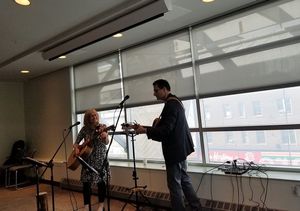 We couldn’t talk about the Summer highlights without mentioning our two monthly residencies.  Our 60’s Folk Revival Sing a Long at the Free Times (third Wednesday of the month!) continues to be such a wonderful, uplifting gig. After every show, it always feels like 'the best show ever’ thanks to the enthusiastic and engaged audiences. Stay tuned for news on plans for 2020. (Photo: P. Chan) 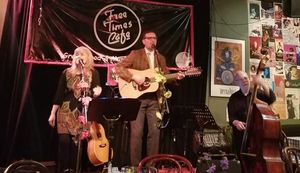 The 120 Diner has quickly grown into a real favorite place (last Thursday of the month!).  We can really stretch out musically there and alternate show themes each month. In addition to our folk themed shows...'Music of Bob Dylan and Leonard Cohen' with Shelley in July, 'The Greatest Hits of Peter, Paul and Mary' with the wonderful Henry Lees and Tony Laviola in September, and 'The Legendary Ladies of Folk' this month...we also presented an evening of 'Sue and Dwight Original Music' in August. (Photo L: LiveMusicHead / Photo R: I. Steer) 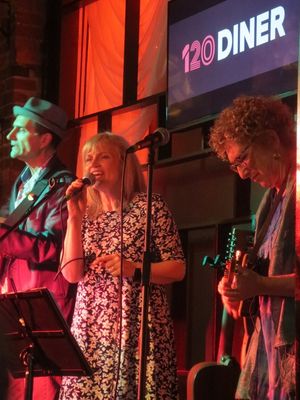 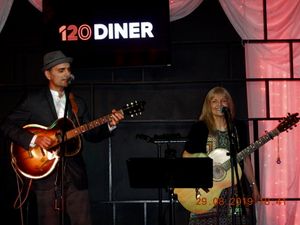