Our new CD, with the working title ‘For A Moment’, got off to a flying start at Revolution Recording this month. We spent 7 solid spectacular days laying down bed tracks, vocals, you name it, in this fabulous place with their great staff. We also had the ‘Sue and Dwight’ musical family with Kevin Quain and Mike Elmer producing different songs.  Here are just some of the highlights.  An early 2016 release is planned.

Day 1: We meet Stephen Koszler and James Finnerty our engineers who we will be in lock step with for the next 7 days. Mike gets the CD off to a great start. We’re in the big room, Studio A, and Adam Warner who played drums on our last CD and fellow Manitoban and bass wiz Jesse Dietschi nail some great rhythms on 5 tracks that will expand our sound.  Jesse plays a grand old German bass on my Stompin’ Tom song and Beethoven rolls over again!  But questions abound… can we do it all in 7 days, will I get permission for lyrics on World Made By Hand, how can this studio be so great??
Later on Day 1: Rehearsal night with Swamperella. I learned to play accordion listening to Swamperella CDs and our song Uncle Joe channels their great sound. I asked them to play on the song and when they said ‘yes’ it was quite a rush. It was a bit of a magical evening as we exchanged musical ideas in the round in an old Parkdale coach house on a beautiful Summer’s night. They’ll join us in the studio on Day 7.

Day 2: We’re greeted again cheerily at the door by Amanda, which we enjoyed and appreciated for the entire run.  It’s a day of guitars, and vocals in cozy Studio C as we build on Jesse and Adam’s tracks. There’s a country song, Stones-like song, a quirky song, and gospel  style song. We break for lunch at 3pm… hey man we’re in the studio…and come back to get vocals down on 4 songs before quitting time. Sue and I can see each other though the gobos which really helps the singing and allows me to observe that Sue got a lamp in her booth…

Day 3: We start a new batch of 5 songs with Kevin Quain at the board and Dave Lang in on double bass.  Dave and I get the beds down on these our more acoustic tunes. We make preparations to have the Nordheimer upright piano readied for its work out tomorrow. It sounds like the old piano in my parent’s basement.  The CD is off to a flying start!

Day 4: A days of keys. Kevin is conscripted for piano duty on Sweet Ida, Suddenly Invisible and Too Little Too Late. After some accordion tracks, I add the piano to World Made By Hand and it’s on to vocals. Stephen is creating pencil mixes for us each day…the songs start to take their own shape. We have a pooped but incredibly happy ride home on the band bus (#510 Queen).

Day 5: We finish up the vocals on this batch of songs and Shelley Coopersmith joins us to add some violin (or is it a fiddle?) to Tommy Douglas and For A Moment. Mike comes in with some mixes of the 1st batch and there are smiles all around. Sadness in Your Eyes sounds like a Stones song. We lay down an inspired vocal to World Made By Hand and I cross my fingers that I hear from James Kunstler soon! We eat lunch at 4 o’clock because …hey man we’re the studio.  Stephen and James are still going strong after another long day…how do they do it?

Day 6: Wendell Ferguson is in to lay down guitars and he’s doing it all…classical, Stones’, R&B. We’ve known Wendell for years and have been looking forward to this for a while. It’s a thrill! When we get home, there’s a very nice message from James Kunstler with a go ahead. I borrowed some lines from his book World Made By Hand on my song of the same name …the thrill meter just popped again!

Day 7: Not only the final day but an ambitious one back in Studio A, so we’re pumped. Mike Daley’s vocal quartet absolutely nails the gospel harmonies I was looking for on World Made By Hand.  Mike’s joined by Jason Farrar, and Laurel Tubman and Karen Scovell of the Nathanial Dett Chorale. Karen’s voice is so powerful we have her stand back a couple of feet from the rest! I have to fully relinquish the producer’s chair to Mike because I keep tearing up as it comes to life.  The hand claps and ‘hmmmms’ send it over the edge.

Swamperella arrives and we lock into Uncle Joe and also Music Stirs Her Soul. Connie and Rachel create a great rhythm. Peter and I create a double accordion attack to ‘Joe… absolute magic!

It’s 6pm and we still have 3 vocals to do which just ride on the adrenaline of the day. We bid a fond farewell to Stephen and James and hop into the band bus (still the #510 Queen) with Kevin for home as the sun disappears. Sue’s words from For A Moment ring in my head…”I know my work here is done’. 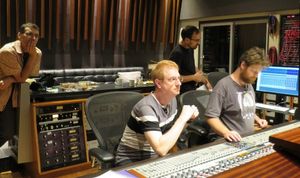 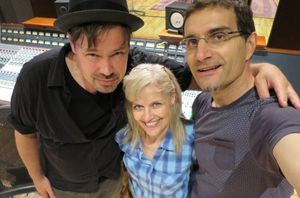