I am so thrilled to tell the story behind this song...the actual story of Alastair Duguid and the story of how I came to 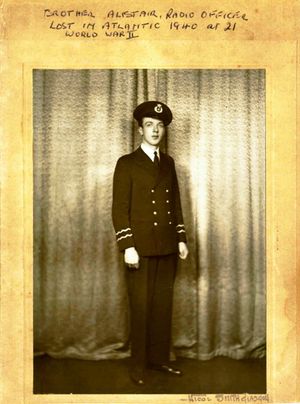 Throughout 2020 we have been presenting our music online. One of the beautiful things about that platform is that there are no borders, and so we are reaching audiences around the world. In January 2021, I received an email from Charles, a regular viewer from Scotland. He told me the story of his Uncle Alastair who was lost at sea when his ship was torpedoed during WW2.

A year or so ago, Charles commissioned Gemma Donald, a winner of the Glenfiddich Fiddle Championship, to compose a Slow Scottish Air in honour of his uncle. His own attempts to write lyrics for it, were foiled when he'd be overcome with emotion and he asked if I would be willing to write them. I was honoured and nervous at the same time, but found it to be such great experience I am so glad I took on the project. Charles had written the first line "When I look out at the sea there's a memory for me" before tearing up so I decided to honour that effort and build the rest of the song off of it. Shortly after completing it, we debuted the song on our weekly Livingroom Live show and went on to record it.

Here's a brief account of the story of Alastair's fateful voyage on The SS Bradfyne where he served as the First Radio Officer. The ship left Montreal bound for Belfast in Northern Ireland with a cargo of grain as part of Convoy SC-11. For reasons unknown, the ship's Captain made the decision to leave the safety of the convoy. It was a move that proved disastrous when U boat 100 fired a torpedo at the Bradfyne just 170 miles off the north Irish coast. The torpedo caught it midship and it sank within minutes. Only 4 members of the 43 person crew survived; rescued after a few days in a lifeboat by The Norse King, a Steam Merchant ship. As First Radio Officer, Alastair's final act of courage would have been sending out the SOS signals that may have been responsible for the rescue.

Alastair was just 21 years old when he died. From what I've learned from Charles, he came from a very close family. He documented his adventures, while on The SS Bradfyne, in letters to his brother, Charles' father. He said Alastair was an excellent pianist and could make a piano “talk”. Their parents were unable to accept that their son had drowned and held on to hope for the rest of their lives that he would return home.

You can listen to the song here: Alastair of The Bradfyne